As I made the transition from an elementary level coach to a middle school teacher I began a new blog.  All new post will appear only on Elementary Teacher in Middle School.  Please follow me there.
Posted by Unknown at 7:08 AM 1 comment:

For Every One There Are Two

If you're anything like me, you don't do your job for your own glory. You work hard and bend over backwards for the greater good. You keep at it everyday so when your time is up and you have to give an account for the work you've done you'll hear the response, "Well done good and faithful servant".
Sometimes being a coach can be tough. You work your butt off to support teachers as they bust their butts to move students towards mastery. There are those who seek your help and others who don't. There are those who need your help and others who resist it. But let me encourage you. For every one teacher who resists, there are two who want you. For every one teacher who says what you've done isn't helpful, there are two who say you've given them just what they needed. For every one teacher who discredits your suggestions, there are two who at least see the process all the way through.
Mathematically, there are more you appreciate your work and support than those who don't. I dare you to remain focus on the greater good. Don't allow the outlier to skew the data of why you are important.
Posted by Unknown at 3:02 PM 1 comment:

Email ThisBlogThis!Share to TwitterShare to FacebookShare to Pinterest
Labels: Coaching

Preaching What You Practice

Since 2010, I functioned in the role of math coach until the beginning of last school year. Feeling a bit burnt out and moving to a new school district created a perfect opportunity to go back into the classroom. With an amazing group of 7th graders, I was able to practice a lot of things I had preached for the past 4 1/2 years.
As in just about every class, I faced difficult situations relating to academics and behaviors. With each situation, I had two choices, model dysfunction with my response or model a functional response.  More times than not, I chose a functional response. For me, I thought about how I would want a teacher responding to my child in a situation such as the one I was facing. More importantly, I thought of those students as human beings who may not have had an example of respect for other human beings.
Sidebar #1: if you can't see pass the behaviors of your students and see them as human beings, you have a humanities issue.
The more I chose to model respect and proper responses, the more my students began to model it to one another. At the end of the day, we weren't all singing "Kumbaya" but it looked much less like a reality tv show and more like a loving family.
Sidebar #2 https://youtu.be/7d4gmdl3zNQ This video is a perfect visual of how our behaviors are mirrored by those watching us, children and adults alike.
Fast forward to June 23rd-June 25th. I was conducting a workshop for a new course. The materials presented within the workshop had the potential to make some teachers feel uncomfortable. Just as I did within my classroom, I began establishing a safe, risk free environment within the session by honoring all responses, providing feedback and asking clarifying questions. Even still, there were participates who made an effort and choice to spout negative comments directed at me, challenging the very environment I was working to maintain. A district leader talked throughout the sessions, even as others shared their thinking with the entire group. One teacher went as far as to flick her hand at me as if I was an annoying gnat buzzing in her ear.
Because I had been practicing the modeling of functional behavior for a while, I could preach it in a setting such as the one this week. The negativity wore me down to the point of frustration, yet the participates were none the wiser.   Although inside I was fuming, I intentionally responded with respect to the unwarranted responses. I was able to trust the process because I had seen the process through in other forums.
Sidebar #3 I knew if I had "went off" on those teachers as I wanted to, they would have shut down and not wanted to hear what I needed to share with them. Here's a great article about this affect http://mobile.nytimes.com/2015/06/21/opinion/sunday/is-your-boss-mean.html?referrer=.
Sidebar #4: you need a safe place to vent your true feelings. We are all human and have our limits. However, this doesn't mean we must go around waving our fingers in people's faces putting them in their place.  So you go to trusted friends and colleagues, express how you're feeling and allow them to give you rational ideas for the next encounter.
The old saying is "practice what you preach". But after this week I believe we've had it backwards all this time. We must preach what has been practiced. It's the experience that helps us cope with the moments that arise. It's experience that helps us develop strategies for how to deal with the new experiences. I can say what I would do in various situations, but it isn't until I go through it when I get to see how I would really respond. Practice making a positive impact so you can preach it.
Posted by Unknown at 7:07 AM 1 comment:

I'm willing to put money on this.  Every teacher who has taught mathematics using a textbook has at one time or another completely disregarded the state standards and taught whatever was in the textbook. I remember my first year teaching in Georgia, we were told to teach the textbook from cover to cover, starting with chapter 1. That year, 42% of my fifth grades passed the CRCT.
Now I know there are a lot of factors that go into the low scores. Superfical, one instructional approach of the textbook being a main factor. In addition to that, the textbook covers a lot of material not within a specific grade level's standards.
Let me be a little more specific. During a hallway conversation with a fellow 7th grade math teacher, it dawned on me. She mentioned she was currently teaching slope and rate of change. Although I'm new to the grade level, I worked extensively with the standards during the summer. My response of slope and rate of change being an 8th grade standard was met with an even more interesting response.
When teachers have taught the same grade level for many years, it's only natural that you use your experiences to guide your instruction and no longer refer back to the standards. So her response was a natural one. Her experiences gave her confidence in knowing she needed to teach slope and rate of change. The only problem is, several years ago Georgia adopted CCSS and within Common Core Georgia Performance Standards slope and rate of change are 8th grade expectations.
In her defense, the textbook confirmed her notion by having lessons specific to those concepts within the 7th grade book. Like I told her, you have to be careful to compare the textbook with the standards. The textbook companies are in it to maximize their money. They create their books to market them to mutliple states. Although it has a picture of Georgia on the cover, it still isn't fully aligned to the CCGPS.
Is the textbook dictating your instruction? Are you running the risk of not going deep enough with your grade level standards because you're covering standards outside your grade level?  Could you be creating misconceptions for students by introducing a concept they are not developmentally ready for nor have the proper foundations?
Posted by Unknown at 6:55 PM No comments:

You Do Before They Do

When you assign tasks, how often do you actually work through them prior to implementation?
If this isn't a common practice of yours I encourage you to begin doing so. Actually doing the tasks yourself provides insight to the misconceptions that may arise, background knowledge required, if the task addresses the standard in the manner you intended and gives guidance as to what mini lesson to teach.
Common misconceptions are listed within the GA framework tasks, but as they're label says, they are common. Who knows your students better than you?  Walking in their shoes will be a better indicator of where they may struggle. From this you can create guiding questions to ask as students are engaging in the task. You can also create scaffolding questions or activities for the students you predict will need it.
Posted by Unknown at 5:02 PM No comments:

What is a Math Concept?

I recently received an email from an educator in North Carolina encouraging me to look deeper into the meaning of the word "concepts". Below are snippets of the email. 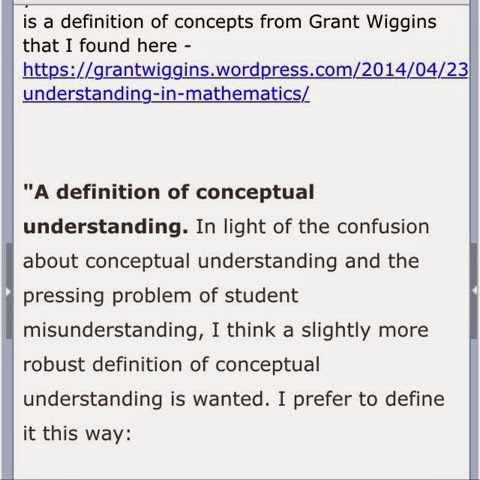 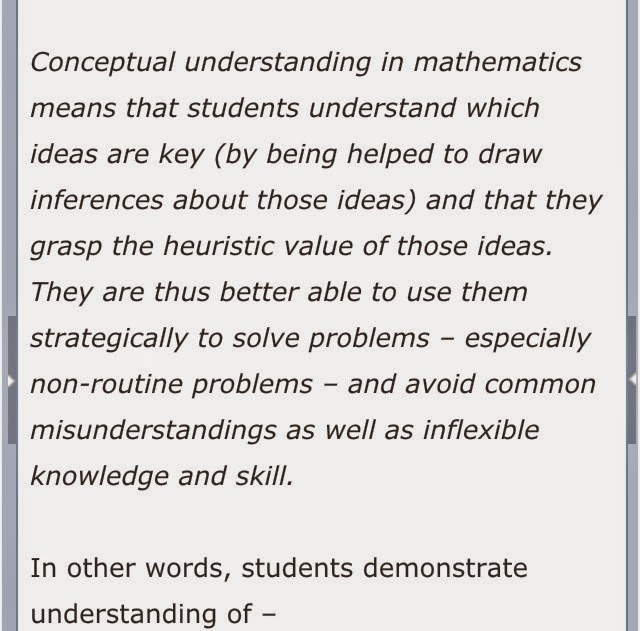 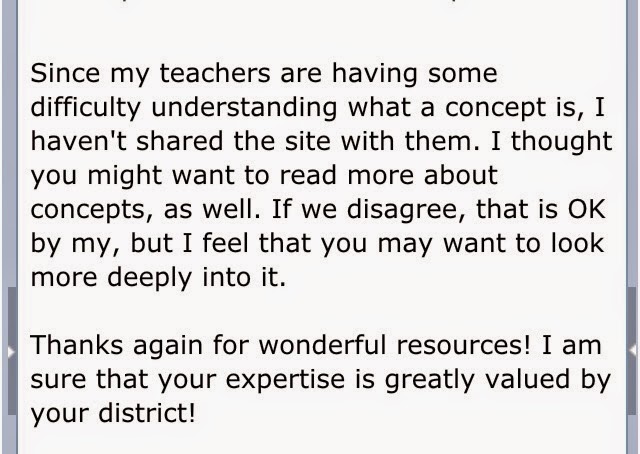 This email stemmed from a category on my website Sensible Mathematics
https://sites.google.com/site/sensiblemathematics/activities-by-concepts. The writer felt the category should not read "Activities by Concepts".
Because I understand there's a constant need for growth which happens when new information challenges my current understanding, I'm open to your perception, understanding and definition of a mathematical concept. Here's my current knowledge: 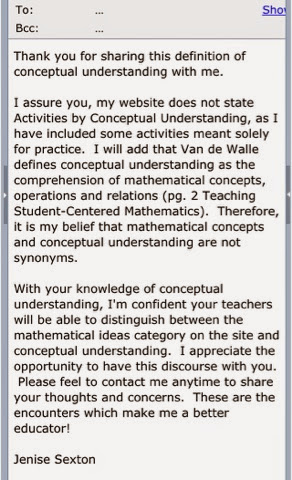 Posted by Unknown at 7:03 AM No comments:

Coach for a Day

I had the pleasure of filling in coaching shoes at the middle school level. After a conversation with our Title teacher about the lack of student reasoning happening within our classes, I introduced a strategy assessment called GLoSS. It originated in New Zealand and assesses student use of strategy in the domains of addition/subtraction, multiplication/division and ratios/proportions.
What was great about this opportunity was it allowed me to put back on my coaching hat and model the idea of student-centered, conceptual teaching. This idea was foreign to the Title teacher who shared he's very procedural in his teaching because it was the way he was taught.
His classroom was set-up in rows and students sat at least one desk away from the nearest neighbor. The students only encountered math in the nude and only needed to worry about getting the correct answer. Manipulatives were never visible. These kids are considered the "bubble kids" with gapping holes in their mathematical understanding. GLoSS and the Numeracy Project http://www.nzmaths.co.nz/numeracy-projects would be perfect for this classroom.
He seemed very open to the entire idea. I would model the assessment and implement a lesson based on the data gained from the assessment. I assessed all but three of his kids determining the strategy range for concepts relating to ratios and proportions within the 7 th grade class was as low as 2nd grade to 4th grade understanding.
The lesson implemented involved the use of manipulatives, context and math discusses of the concept versus the procedure. It's like a grand slam modeling lesson for a teacher who has never seen that in action. A great lesson in which the students were engaged and of which the teacher enjoyed being a part.
I left telling him, if he wanted to discuss the lesson later we could. There was no obligation because I'm technically not a coach. My hope is that change was promoted. Any change...
As I walked passed his classroom to leave for the day I saw this... 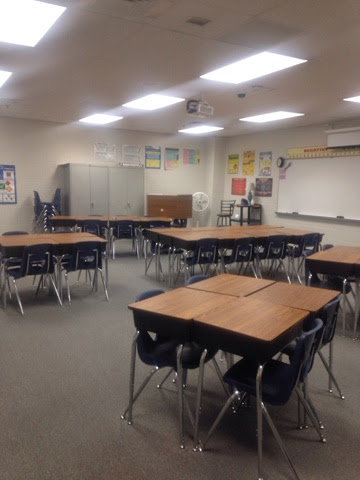 Change.
Posted by Unknown at 9:28 AM No comments: